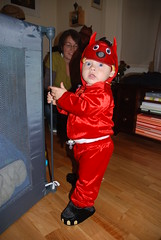 Looking back, I realise that I lived out my teenage years as though I had not received a vital memo, and that everybody knew something I didn't. That contributed a lot to my shyness and anxiety, my perpetual nagging sense of being out of place. (This sense was naturally reinforced by my peers in the world, on account of the fact that my clothing and hair choices were informed by the motto: 'The more unflattering the better! Let's go for maximum shapelessness').

Adolescents frequently experience themselves as outsiders but I also was one. And it is hard to explain what this felt like to those who were never immigrants, who never had to wait in long queues or answer pointless questions, or justify every aspect of their existence; those who never spent years walking between anger and hope and despair, not daring to put down roots lest they be uprooted; those who were not scrutinised and judged at every turn, who never had to assess their right to be in a place - to all these people I truly was an alien.

While England was not outwardly hostile to me it certainly wasn't welcoming, and my adolescence in it was permeated with a feeling of not belonging. As though I was a ratty houseguest, grudgingly accomodated and put up with. And in my turn, in my struggle to find my bearings, I alternated between wanting to erase myself as much as possible and wanting to fit in.

It were surely the resilient, hopeful parts of me that propelled me to join drama in my school. It was fun to do, and it made me less shy. Theater appealed because it was another realm and I was always comfortable with make believe. There on that stage, in pretending to be others, I was free to explore who I could be without fear of embarassment, of slipping up and revealing some gaping inadequacy in myself. And as it turned out in the whispery pent dark behind the stage I was free to explore the boys.

The mix of excitement, hormones and pitch black was the ideal environment for physical overtures. And it was there, behind the set on the opening night of my school's production of Charlie and the Chocolate Factory that I had my first kiss (French kiss no less!).

In my life pre-kiss I had been so anxious about this as only a pubescent girl can (why has no one kissed me yet? am I that ugly? what if I'm really undesirable? What if I don't know what to do? What if I'm no good?). But when my kiss came (unexpectedly, shortly before curtain up when I was swept up in the embrace of a teenage boy who had murmured may I kiss you and introduced his lips to mine) it was marvellous. So marvellous in fact that I demanded more kisses right after (and the cast party was basically a two hour snogfest) because I realised that all my fears were unfounded. My body knew exactly what to do, and for the first time in years I didn't feel awkward. Someone in this godforsaken country desired me, and it was exhilirating.

If I shut my eyes, I can still remember everything. The wave of trembly whooshy giddiness swept through my entire body -from the tips of my budding breasts to my toes. I remember the way my skin tingled and the rush of heat across my face and neck. I remember the tumult of butterflies taking wing in my stomach. I can still remember his hands on my waist and his tongue in my mouth and how each sensation seemed more delicious than the last- how I felt I was becoming unfettered from the earth and taking flight like a character in fairytales- an intrepid princess clinging to the tail of a firebird.

(And later when I caught a glimpse of myself - all shiny eyes and beestung lips and glowing skin- for the first time I thought I saw somebody beautiful).

Later still, when the giddiness and the size of my delicious secret made me feel like I was bursting at the seams and I had to tell someone and I told my aunt that "I had kissed a boy on the mouth! And then again! Only I'm not sure that it was the same boy because it was dark and I didn't really know what I was kissing. But I liked it alot!" - she was not impressed. (One might even go so far as to say that she was horrified). But I was unstoppable - flying high, buoyed by my first taste of freedom. I had glimpsed a marvellous world, one where my right to be was not called into question.

And for years (until the advent of Him Who Shall Not Be Named) sex and intimacy retained that sense of joyful exploration. Of leaping off into the arms of the unknown. Unafraid and in freefall.

Do you remember your first kiss? Did it meet expectations?

Because what my life needs is MORE procrastination....

The blogroll on NaBloPoMo is beyond ridiculous. However, because I am both a nutter and an idiot I am working my way through it in alphabetical order (one day =1 letter) and tagging my favourite finds.

The best of the A's (according to me)

Ali Blah Blah British ex-pat living in America and writing about life and motherhood in a way that is both witty and gramatically correct.

Anita Davies I find her art beautiful. She journals aspects of her day through drawing.

Alien Spouse Another Brit and immigrant to America. From what I've seen of her blog I found it quirky and charming.
Collapse