Matei has lost interest in my bosoms. They appear to fill him with frustration and rage and he spurns my attempts at feeding him by using his wee baby muscles to thrash and throw himself back. I would be insulted by this behaviour, were I not quite enjoying having my bosoms to myself again.

This is a natural development of the fact that my milk supplies have been diminishing since month 4, and upping the child's formula intake (which he LOOOOOOOOVES, it's like crack to him) seemed less frustrating and angst-making than taking the advice for increasing milk supplies which was to basically have the baby hanging off my bosoms in a manner of a nipple tassel at every available opportunity throughout the day and night. Which no. Just no. I have worked too hard on a feeding-sleeping routine to throw it to the winds. When deprived of routine my child develops irritability that increases until his head is practically spinning around like something out of the exorcist and it's a terrible terrible way for both of us to spend our day.

So it's goodbye to all that I guess (pretty bras with underwire here I come! Spicy food! Pickled food! I will reunite with them all, and take fistfuls of non-wimpy paracetamol medication washed down with coctails! I will wear whichever frocks I choose without once having to pause to consider the logistics of Bosom Accessibility!)

I am so heady with freedom that I want to shout with the delight of it and burn my breastpump like a bra.

There are many aspects of Britishness and Englishness and Life On The Isle which I love and embrace with all my heart. But the British sea is not one of them.*

Both Z and I spent a hefty part of our formative years on the Adriatic and Meditteranean coastline, which is why both of us view the British beach experience much as we view the British climate - at best as an ironic amusement and at worst a dire affliction.

For starters, in most places the beach is actively awful. It's often blustery, the sea looks about as brown and inviting as the Thames and even in places where the colour of the water is magnificent (e.g. Cornwall) the temperature is off-putting. I have never voluntarily dipped toe into the English waters without the support of a thermal wetsuit and even in July I have found it too bracing for comfort.

We went to Clacton On Sea last weekend so Z could experience a flying lesson that I'd got him as a birthday gift (as a tangent, I'm the worst spectating wife ever; while entrusted with the task of filming The Event I managed to get some shots of the plane, and the back of Z's head while he and the pilot are walking towards it and then completely missed both the takeoff and landing because I was attempting to prevent the child from putting a stray grape into his mouth for the former and reading a magazine during the latter) and while we were there we thought we might as well check out the beach. 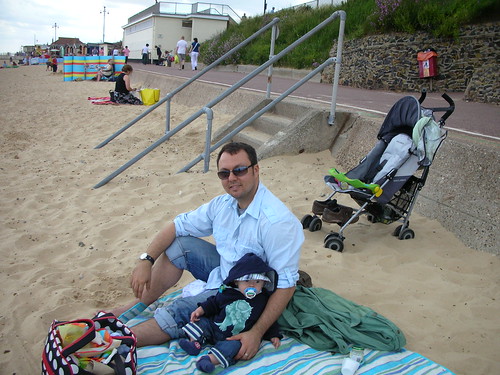 It was overcast and blustery and a mixture of amusing and baffling to Z and I. For starters we were dressed in more warm layers than any other people there (jeans, and jackets while hordes of children gamboled on the sand in non-thermal swimming costumes). We also seemed the least enthusiastic. I saw people cheerfully pushing strollers against the wind, I saw a middle-aged couple having a full-on swanky lunch with champagne on a table and deck chairs sheltered behind a wind-screen, I saw people sitting in front of those strange tiny bungalows, holding on to their wildly flapping newspapers and exuding the air of people who seemed to be very-much enjoying themselves without the use of any sarcasm.

But we are different people. People who don't understand why anyone is brave enough to venture into the English water for fun, let alone send their children in. People who don't get the appeal of owning one of those tiny box bungalows on the beach which allow you to cook a meal, and pull a couple of chairs out and attempt to read newspapers while sand flies in your face and the wind attempts to wrest them from your hands. We also fundamentally don't understand the appeal of fish and chips, especially when combined with vineagar - but that's because the fish I've grown up with was grilled and served with olive oil on a bed of similarly gently grilled vegetables, so stuff that's been battered about with flour and then deep-fried both tastes bland to me and makes my arteries stiffen in preparation for the clogging they are about to receive.

And yet, there are people who genuinely seem to enjoy all this. People who would given the choice prefer to holiday in Britain instead of France, or Sicily, or Dalmatia.

Are you one of the people who enjoys the British coastline or its beaches? Finds fish and chips deligtful to their tastebuds? If so, please tell me what entices you so. Help me understand what I'm missing.

** Other things I hate: camping, hiking and the dreary non-summer we are having for the second year in a row.