Ways in which my husband is a contrary creature:

1. When in the evenings being faced with the suggestion that he might like to do something bonding-like with the baby and acquiring a look in his eyes which suggests that he has a deep yearning to play computer games. On the other hand, when under the influence of love overflow I said "Baby tonight I want to make you happy. Just do whatever you want, and if you want to play games until your eyes bleed then I won't say a word." responding with: "Noooo let's do something together! What do you want to do? I want to snuggle and spend the evening in whatever way you enjoy."

2. Being very tender-hearted and prone to guilt AND almost congenitally incapable of saying 'I was wrong, I'm sorry' especially when that is clearly the case.
(N: It's a conversation, not a war!
Z: But I don't want to looooooose!)

Ways in which my husband is an incomparably splendid creature

1. Rearranging his work schedule so he can best support me in my Pregnancy Needs.

2. Embracing the burden of the housework without complaint.

3. Being unfailingly cheerful and energetic (unless struck by Shocking and Debilitating Man Pain)

4. Taking on a very protective role to ensure I am as free from stress and hassle as possible, thus freeing up my energies to focus on growing the baby.

5. Attending a HypnoBirthing course last weekend with me, despite it totally not being his scene, and admirably restraining his impulses to be disruptive.

Ways in which my husband is an ostracised creature

This weekend, in Hypnobirthing class having just watched a few extremely graphic full-frontal videos of childbirth we break for lunch. In the kitchen a Shiny-Eyed Young Man, Z and I are making tea.

SEYM to Z: Good luck with your birth!
Z: Well, it's not my birth, it's hers.
SEYM: *gives me pitying look, emits more stony silence*

Z (mournfully, to me): I am so misunderstood.

And finally, some gratuitous feline imagery, featuring Isabel aka New Cat aka the waif-like urchin who showed up one day from god knows where and put herself up for adoption attached herself to my household with the tenacity of a barnacle. At the moment she seems to operate on the binary modes of either Terror! or Death by Ecstasy. She has also ousted Z from his place as Most Favoured Snuggler. 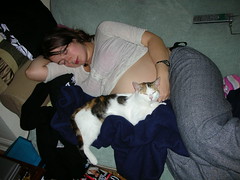 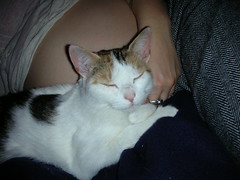